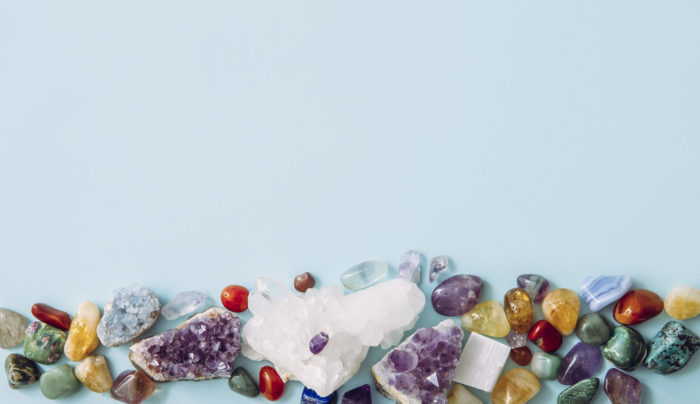 A Guide to Birthstones

Birthstones are gemstones which are associated with either a month or a star sign. They are often worn as jewellery; either as an emblem of one’s own birthday or as a signifier of loved ones.

Read on for a brief history of birthstones and to find out your own!

The History of Birthstones

The concept of birthstones is an old one, but it has evolved over time. Interestingly, it has its roots in the book of Exodus. A 1st century philosopher believed there was a link between the 12 stones on Aaron’s breastplate, the 12 signs of the Zodiac, and the months of the year. This concept evolved until others believed that each stone represented an apostle. Thus, priests began to wear one of each stones for every month of the year.

Those early lists of stones differ quite a lot from our modern birthstone lists because they have been retranslated and evolved through various artistic interpretations. Indeed, the modern Western birthstone lists are most similar to those from an anonymous set of poems which were published by Tiffany & Co in 1870. These poems link a stone to each month of the Gregorian calendar.

In order to standardise birthstones, the Jewellers of America met in 1912 to create an official list. This list was updated in 1952, 2002, and 2016. Similarly in the UK, the National Association of Goldsmiths created their own standardised list of birthstones in 1937 which was updated again in 2013. This is the list we will be focusing on today.

Garnet has been a popular gemstone for jewellery since the Roman times. 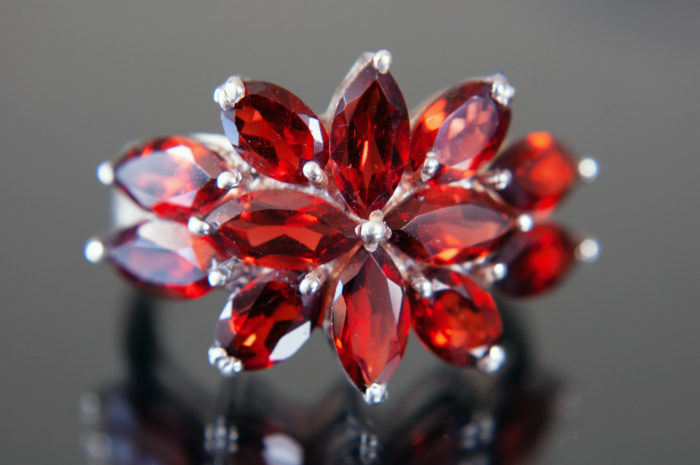 Known most for its vibrant red colour, the mineral can also occur in shades of green, yellow, and orange.

Amethyst is a variety of quartz usually known for its deep violet colour. However the colour can range from a pale violet to a deep purple. 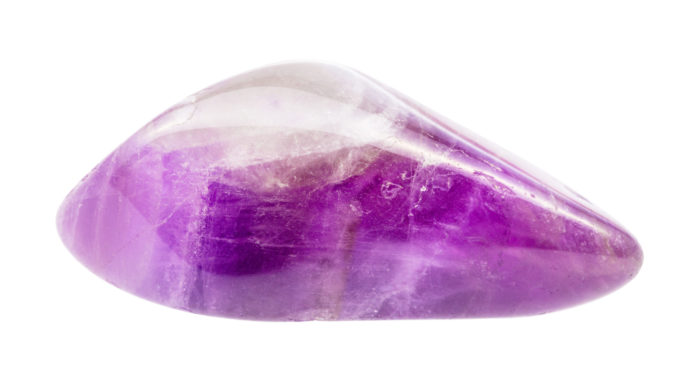 A fun fact is that Ancient Greeks believed that amethyst could protect from drunkenness, so often carved wine goblets out of the stone.

Some months have multiple birthstones associated with them. For example, March babies can choose between serene aquamarine or vibrant bloodstone.

Aquamarine is a pale blue variety of the mineral Beryl, which is the same mineral as Emerald. The name translates to water of the sea and it is closely related to the sea due to its blue colour. Thanks to this blue tone, it has historically been used a symbol for youth and happiness. 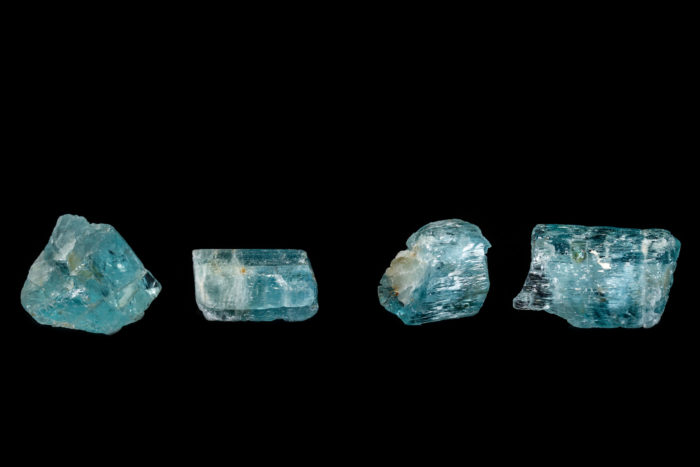 Bloodstone is actually a mixture of minerals. It is formed from Jasper with red inclusions of hematite. Pliny the Elder believed that magicians used bloodstone as a stone of invisibility, and others believed the stone had the powers to cause rain and solar eclipse. 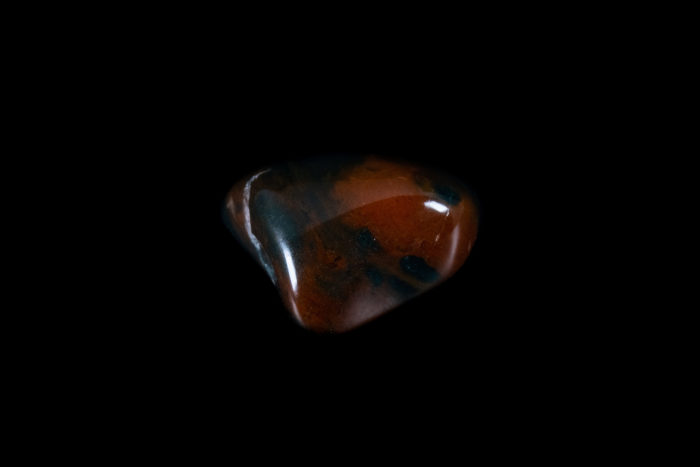 An option for every budget, April babies can choose between diamond and rock crystal.

Diamonds are compressed carbon known for their inner fire and hardness properties. Diamonds can occur in several colours, but are most well known for being white and clear. They are graded on several scales known as the 4 Cs. These stand for Carat, Colour, Cut, and Clarity. You can learn more about diamonds in our buyers guide.

Rock crystal is a term for clear quartz. Quartz is a mineral formed of dense silica, and is the second most abundant mineral in the Earth’s upper crust. It has often been used for carvings throughout history, and is available in a large variety of jewellery. 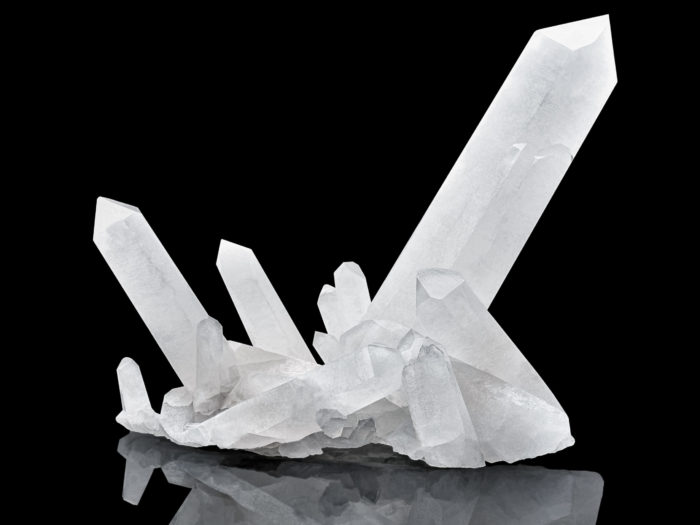 May – Emerald and Chrysoprase

Emerald, like aquamarine, is a variety of the mineral Beryl. It is incredibly rare and even less abundant than diamond. It is naturally a very included stone, so larger emeralds are rare. Known for its deep green colour, Emerald is one of the cardinal gemstones. 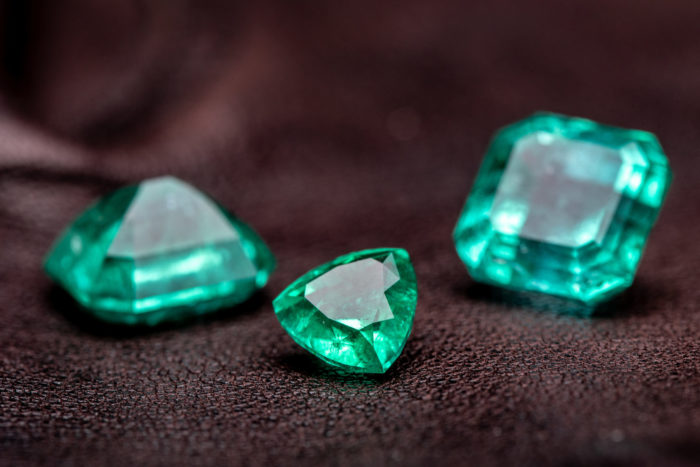 Chrysoprase is a variety of chalcedony. Its colour ranges from pale to mid-green, hence its name which translates to “green and gold” in Ancient Greek. 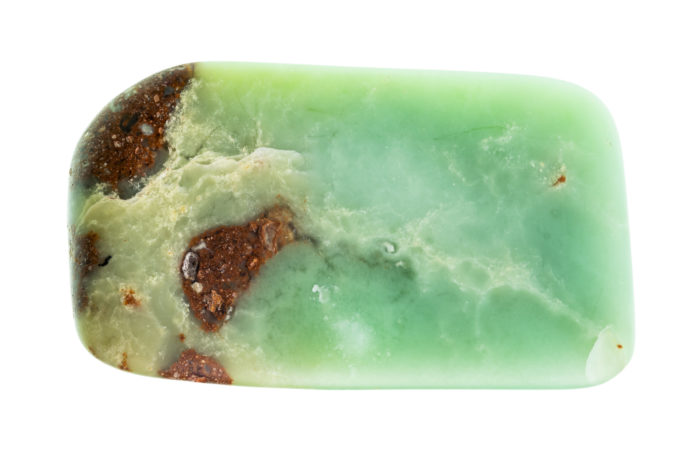 Ruby is a variety of the mineral corundum. It is known for its red colour, ranging from a pinkish red to a deep blood red known as pigeons blood. Ruby is one of the cardinal gemstones. 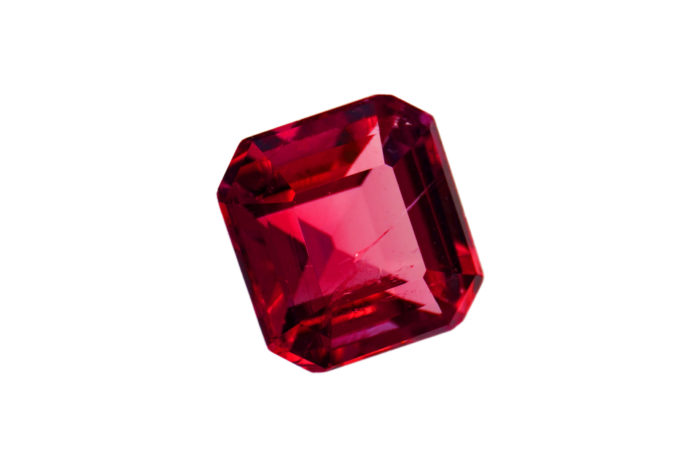 Carnelian is a semi-precious gemstone known for it’s brownish red colour, although the colour can vary, ranging from pale orange to an intense almost-black tone. It has been used to make beads from as early as the Neolithic era. 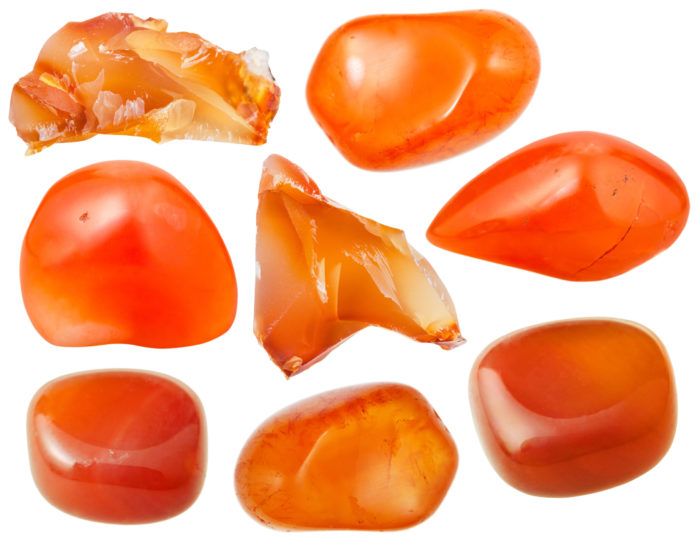 Peridot is a vibrant green gemstone and a variety of the mineral olivine. Unlike most other gems, it is not formed in the Earth’s crust and instead forms in the molten rock of the upper mantle. Due to its fiery early life, gem-quality peridot is rare to find on the Earth’s surface. In the Middle Ages, people believed that peridot could provide healing powers, cure depression and open the heart. 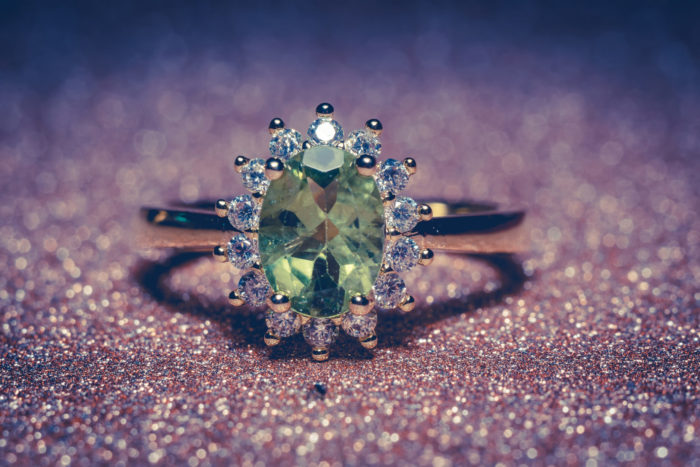 Sardonyx is a variety of Onyx, which is a mineral formed of concentric bands of chalcedony. As opposed to the stark black colour that Onyx is known for, Sardonyx features red bands of colour throughout. 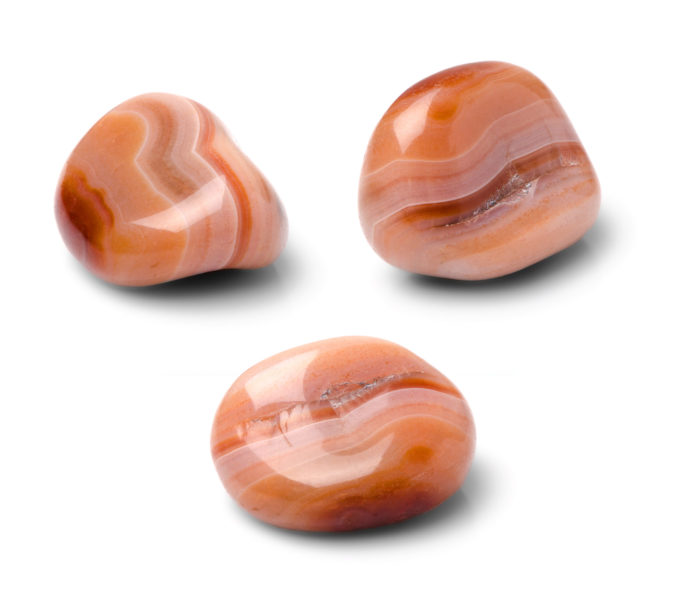 Sapphire, like ruby, is a variety of the mineral corundum. Primarily known for being a rich blue colour, sapphires are also found in yellow, purple, orange, and green colours. The name sapphire translates to “sacred to Saturn” and many cultures believe that sapphires have an effect on the planet Saturn and the weather. An Italian superstition claims that sapphires are amulets against eye problems, and melancholy. 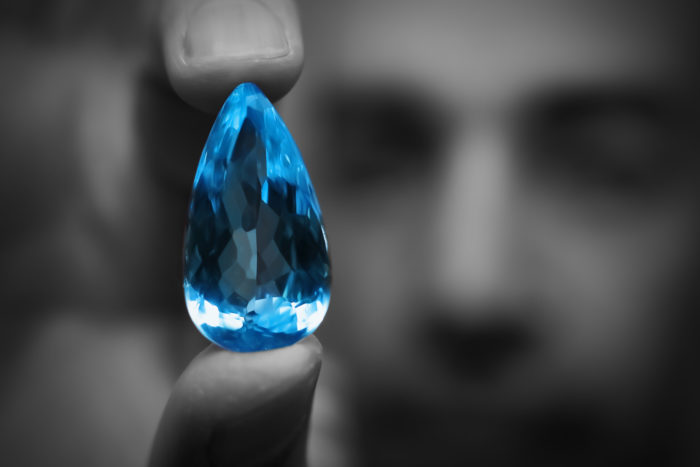 Lapis Lazuli is a sedimentary rock which is valued as a semi-precious gemstone due to its vibrant blue colour. The mineral has been mined from as early as the 7th millennium BCE. Furthermore, the gem was used from the Middle Ages to make Ultramarine, one of the most valuable oil paints of the era. This was used by many Renaissance artists and particularly for images of the Virgin Mary.

Opal is a mineraloid formed of silica. It is hydrated, so many forms of non gem grade opal must be kept submerged in water to prevent them from drying out and cracking. Precious opal is known for its internal included structure which causes flashes of colour to be visible on its surface. 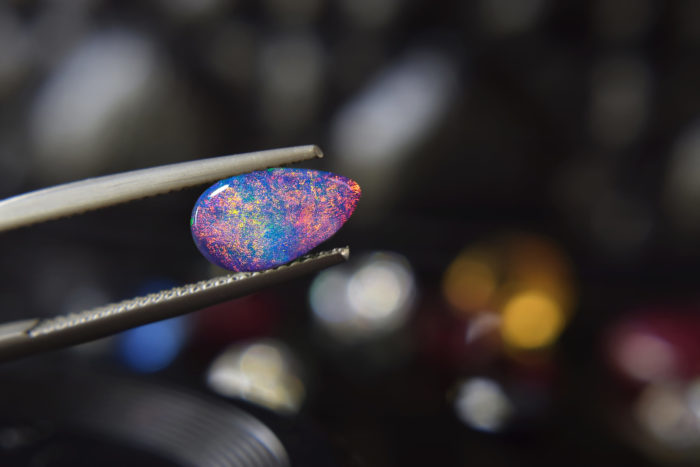 Depending on the conditions in which it formed, opal may be transparent, translucent, or opaque. The background colour of the mineral can be white, black, or nearly any colour of the visual spectrum. Black opal is considered to be the rarest, whereas white, grey, and green are the most common.

Topaz is one of the hardest naturally occurring minerals. Most commonly topaz is colourless, but it can also be found in shades of pale blue, golden brown, and yellowy orange. An old English superstition claimed that topaz cured lunacy, while the ancient Romans believed that topaz provided protection from danger while travelling. 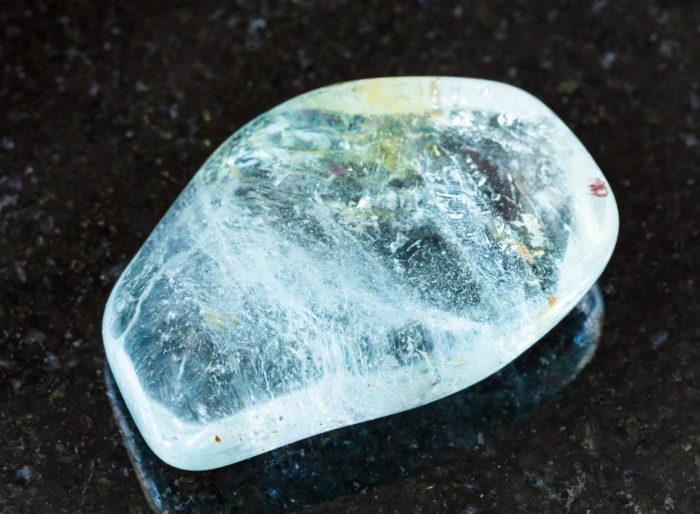 Citrine is a yellow variety of quartz. It is one of the most rare colours of quartz so most of the citrine on the market is actually heat treated amethyst. Citrine has been referred to as the “merchant’s stone” or “money stone”, due to a superstition that it would bring wealth. 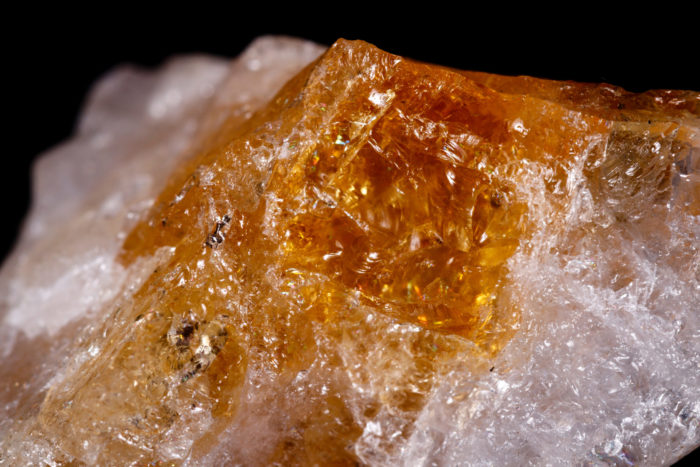 Tanzanite is the blue and violet variety of the mineral zoisite. It is only found in a very small mining area of Tanzania. Interestingly, Tanzanite was named for its origin country by Tiffany in 1968. Tanzanite is known for its ability to appear different colours depending on the light and the position of its crystals. It can shift between tones of blue, violet and burgundy. 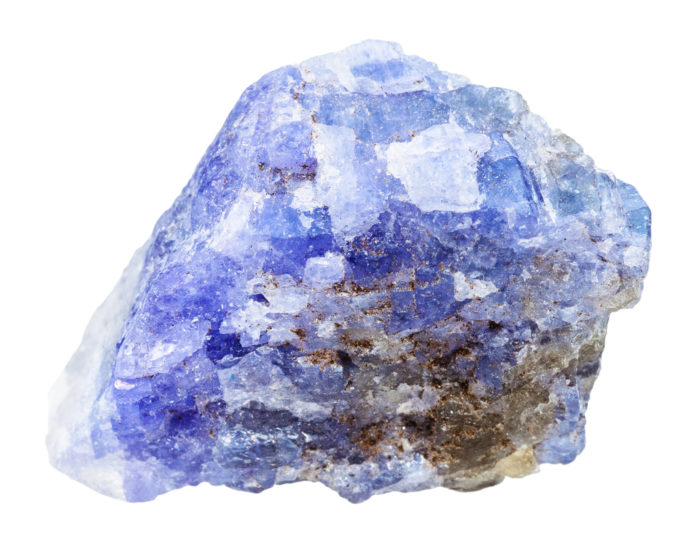 Turquoise is a vibrant blue green mineral known for its unique opaqueness. It has been highly valued for use in jewellery for thousands of years. The name Turquoise originates from the French work for Turkish because that is where the stone was originally imported from. Thus the colour was named after the stone! 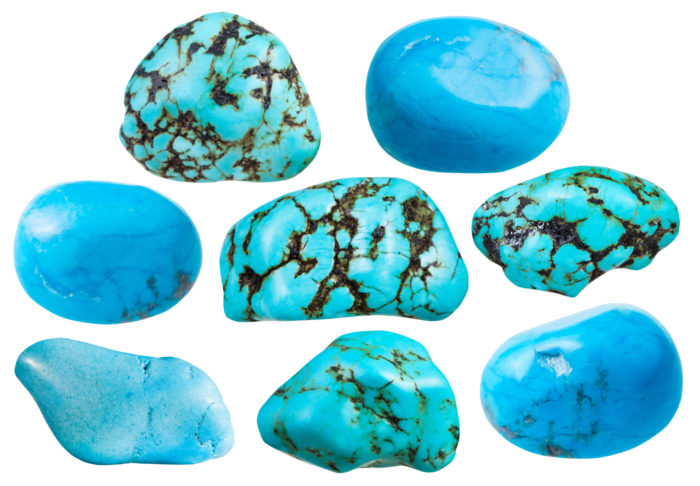