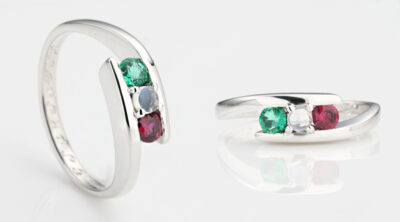 The Story of a Bespoke Birthstone Eternity Ring

Sometimes a piece of jewellery is given for such a personal reason, that the jewellery becomes a part of the story itself. We often find that these pieces of special, milestone jewellery need to differ slightly from what is available as a standard design. Our bespoke service was dreamed up with this idea in mind. The birthstone ring that we made for Gary and Yvonne to celebrate the birth of their first child is a beautiful example of this.

Gary ordered his ring from us in August, 2013. He came to us with an idea for an eternity ring for his partner Yvonne. Gary and Yvonne had their first child, Oliver, in June. Gary wanted to have a ring made for Yvonne that would represent this momentous occasion, and honour their new family. 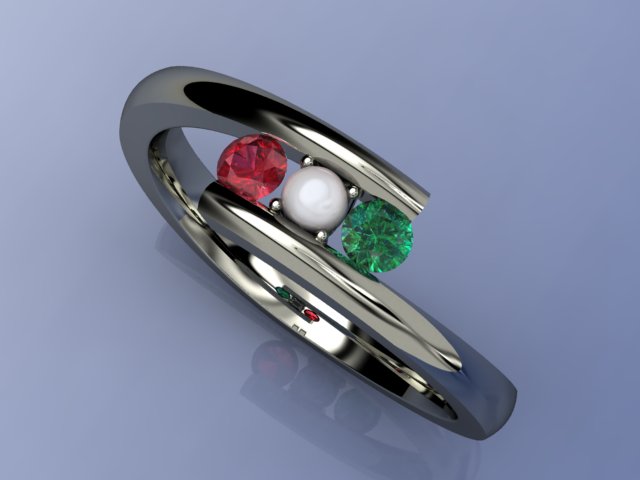 The design for the ring began with his idea to have all three of their birthstones set into a band. Firstly, he wanted Oliver’s birthstone, a moonstone, to be in the centre. Gary and Yvonne’s birthstones, a ruby and an emerald, would be either side. This idea was to symbolise Oliver’s parents always being by his side as he grows up. Gary contacted our in house, jewellery designer, Kim Hall and explained his idea. Gary also sent Kim some images of a couple of styles that he liked. The designing process began from there.

Kim used the image Gary provided as a starting point and began designing a ring in 9ct white gold, with a similar cross-over style. The stones in the image he provided were what is called ‘tension set’. This is when the stones are held in place by pressure rather than a bezel, prongs, or any other type of mounting. This setting gives the appearance that the stones are suspended in the air with nothing holding them in place.

Kim was faced with a bit of hurdle when it came to incorporating this setting into the design. Moonstones are usually cabochon cut which means they have a flat bottom and a smooth, very rounded top. This is in contrast to most other stones which are cut more angular like a diamond. A cabochon cut stone cannot be tension set. This meant that Kim had to adapt the design so as to cater for the moonstone.

Based on Gary’s ideas, Kim proceeded to create two CAD (computer aided design) drawings of the ring. Each design featured a different setting option for Gary to choose between. This first option was to have a ‘rub over’ setting for the moonstone with the ruby and emerald tension set on either side. A ‘rub over’ setting is a bit like a tube that holds the stone in place. The second option was similar but with the moonstone set with a claw setting. Gary decided to go with the claw setting and the manufacturing process began.

The ring was constructed in our workshop from 9ct white gold wire. Our head jeweller hand shaped and filed the wire into the desired shape and size. Our in house diamond setter then set the three stones to Kim’s design. Once the stones were set the ring was given its final polish and then the ring was rhodium plated.

As a final touch, Gary then decided to have the ring hand engraved on the inside with a personal inscription. Just 6 weeks from when Gary contacted us with his initial enquiry, his idea had been turned into a reality. From design to delivery, bespoke items usually take around 6 weeks. The ring was exactly as Gary had imagined, and he has since told us that Yvonne absolutely loves it.

Do you like the idea of having a ring designed especially for you? If so, contact our bespoke team at [email protected]. Firstly we will need an idea of the metal you would like, your size and any specific design details that you have in mind. After you have decided on those aspects, attach any images that have inspired you. We will use these to start the design process. Read more about our bespoke service here.